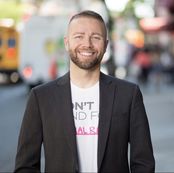 ​Founder and Executive Director Brian Silva has been a leader in the LGBTQ+ advocacy community for more than a decade. He has a proven track record in executive leadership, organizational development, coalition building, organizing and empowering volunteers. Brian served as Executive Director of Marriage Equality USA (MEUSA), which was one of the nation’s oldest and largest volunteer, grassroots LGBTQ+ groups. In 2012 he began NEAT as a program of MEUSA and has since shepherded its success, most recently in 2017 when NEAT became an independent organization dedicated to harnessing the unique power of LGBTQ+ people and their allies to take collective action for Justice.
Empowering Everyday People Anywhere, to Make Extraordinary Change Together, for LGBTQ+ Justice Everywhere